PRCC and its stakeholders have received several grants throughout the past few years! Read on to find out what projects are being funded thanks to these awards.

The Pittsburgh Region Clean Cities Western Pennsylvania CNG Conversion Initiative Program with partner United Parcel Service, purchase 20 CNG trucks – $500,000 will help the UPS fleets convert to compressed natural gas (CNG) in western Pennsylvania. This project will utilize 20 new alternative fueled Class 8 Tractors that run on CNG and build a new private CNG Refueling station in the New Stanton, PA area. Our project is poised to displace 318,000 gallons of diesel per year which equates to 1,272,000 gallons for the 4 years required for this project. One of the most important statistics for replacing diesel fuel with compressed natural gas is the reduction in carcinogenic particulate matter. 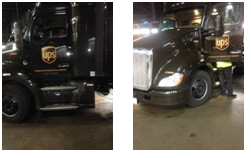 The Pittsburgh Region Clean Cities’ Western Pennsylvania Alternative School Bus Program will help 10 counties in western Pennsylvania, utilize 50 new school buses that run on propane. The goals and the objectives of the project are to provide air quality benefits to school children who ride these buses and fuel cost savings to those districts who utilize propane to replace diesel in their vehicles. This project will be an aggregated project with 11 private bus companies and 1 school district brought together by the Pittsburgh Region Clean Cities Western Pennsylvania Alternative Fuel School Bus Program, purchase 50 propane school buses – $250,000, Our project is poised to displace 162,842 gallons of diesel per year, this project will save $2,749,051 in fuel cost and maintenance (25% savings) at current pricing and assumptions over the next 12 years.

The Pittsburgh Region Clean Cities’ Western Pennsylvania Alternative Fuel Vehicle Program, purchase 33 propane and CNG vehicles, buses and shuttles – $216,192 The Western Pennsylvania Alternative Fuel Vehicle Program will help 8 counties in western Pennsylvania, utilize 33 new alternative fueled vehicles that run on alternative fuels. The goals and the objectives of the project are to provide air quality benefits to western Pennsylvania and fuel cost savings to these companies who utilize these vehicles to replace diesel and gasoline in their vehicles. Our project is poised to displace 153,550 gallons of diesel per year which equates to 614,200 gallons for the 4 years required for this project. One of the most important statistics for replacing diesel fuel with propane is the reduction in carcinogenic particulate matter.

PRCC will receive $238,467 for the Energy Corridor 376 project that will establish 45 (Under original proposal now 63) electric vehicle charging stations along Interstate 376 and surrounding areas. Energy Corridor 376 is a partnership of 19 regional public and private entities working to expand electric vehicle infrastructure in the region. Adding to the existing nine charging stations, this project sets the stage for subsequent expansion and electric vehicle adoption. It is expected to displace an estimated 79,463 gallons of fuel per year and provide annual emissions reductions of 916,046 pounds of greenhouse gases, 1,306 pounds of volatile organic compounds, 10,363 pounds of carbon monoxide, 1,571 pounds of nitrous oxide and 1,026 pounds of particulate matter.

PRCC received an Environmental Protection Agency Clean Diesel Grant to purchase 18 CNG vehicles. The total value of the grant is $3,555,000, of which $888,750 is public monies and $2,666,250 is private matching funds. Contact coordinator@pgh-cleancities.org for more information

Building on the work of the first two fueling stations, a second AFIG grant was awarded to PRCC in 2009. This grant will build two additional fueling stations, one in Braddock and the other at the City of Pittsburgh 2nd Division Public Works facility in Pittsburgh’s Homewood neighborhood. Additionally, the grant assists with vehicle upgrades from local company Optimus Technologies that will allow several partner fleets to use 100% biofuel. These fleets include The City of Pittsburgh, Tallon Logistics, Global Links and The Greater Pittsburgh Community Food Bank

Under the Innovative Technology category of AFIG, this project received $600,000 in funding from the PA Department of Environmental protection to prove viability. Contact c.huwlyer@optimustec.com for more information.

This project represents the continuation of the Pittsburgh Region Clean Cities’ Clean Pump Initiative (CPI). CPI is an initiative to increase the capacity for distribution of renewable fuels in the Pittsburgh region. The project is underway with the installation of two aboveground biofuel dispensing systems that service private, nonprofit and municipal fleets. The Phase I fueling stations are located in Duquesne and in the industrial district of Pittsburgh’s South Side.

This project, dubbed PV+EV (photovoltaics plus electric vehicle) allows for Chevy Volt owner George Totolos to get his zero-emission electricity from the sun, rather than a local coal or nuclear plant. The 5.5kW install done by Adam Solar Resources uses 25 Sanyo HIT 220 watt modules, which are coupled with Enphase M210 Microinverters. Based on estimated calculations, the energy from the array will provide enough to power the Volt for approximately 20,000 miles per year. Though he will also be using the solar electricity  in his house, it is likely that whenever the Volt is plugged in during the day it will be charging with solar energy, since the EV charger is the closest circuit to the array. To learn more about this project and see photographs, click here.

UPMCwill receive $500,000 to replace 20 diesel-fueled shuttle buses with 20 shuttle buses powered by compressed natural gas. The project will also provide encouragement for additional compressed natural gas fuel adoption and use by UPMC and other organizations throughout the region; provide criteria emissions reductions and significant fuel cost savings; and create jobs. It is expected to displace an estimated 65,000 gallons of fuel per year and eliminate nearly 214 tons of greenhouse gas emissions annually

The Western Pennsylvania Operating Engineers Joint Apprenticeship and Training Program (WPOEJATP) is becoming a leader in advancing the use of alternative energy within the state and, more specifically, for the construction industry. This project focuses on a comprehensive energy independence strategy by implementing new technologies as well as developing a curriculum that provides hands-on training in the area of alternative fuels and technology. Not only is this project deploying an innovative renewable fuel and fuel system technology, but it is also the first application of its kind in a construction setting.

This project is based on the installation of the Optimus Technologies Vector system retrofit technology that enables commercial and industrial diesel engines to utilize a variety of biofuels. The retrofits will enable the training fleet of 46 pieces of heavy equipment to use 100 percent biodiesel and pure plant oil fuel throughout the year.

The training facility, in Westmoreland County, is a partnership between the International Union of Operating Engineers Local 66 and more than 600 employers — most of them contractors — throughout Pennsylvania.  The union has more than 7,000 members and trains approximately 220 apprentices each year, 20 of these specifically in diesel mechanics. This project serves to educate not only the union membership, but the supporting employers on the use of biofuels and operational logistics as well as the environmental benefits and improved conditions for workers’ health.

Under the Innovative Technology category of AFIG, this project received $486,066 in funding from the PA Department of Environmental Protection to prove viability. Contact c.huwlyer@optimustec.com for more information.

Venango Leasing Company received $362,500 to develop a CNG fueling station with convenient public access alongside an existing fueling station in Barkeyville, as well as purchase equipment that will enable its existing fleet to run on a mix of CNG and diesel.

Waste Management was awarded $700,000 to build a CNG fueling station at its hauling facility in Washington, Pa., which will also be available to other fleet operators. The company intends to use natural gas to fuel its fleet of trash and recycle trucks.

Pittsburgh and EQT will replace four diesel refuse trucks with four new natural gas-powered vehicles. The goal of this project is to build momentum, experience and, ultimately, comfort in the city for natural gas as an important, robust and cost-effective fuel for its fleets. Grant funding of $500,000 will be used to purchase two of the four natural gas refuse trucks. The city is providing a matching commitment of two natural gas refuse trucks, estimated at $593,000, or 54 percent of the project. The city’s current refuse trucks consume an average of 4,800 gallons of diesel fuel per year. By using the equivalent of 630,000 cubic feet of natural gas (2.5 million cubic feet total), the project will save the city $38,400 per year. In addition, it will reduce the annual air emissions of CO2, particulate matter, NOx, VOC and CO by more than 200,000 pounds annually.